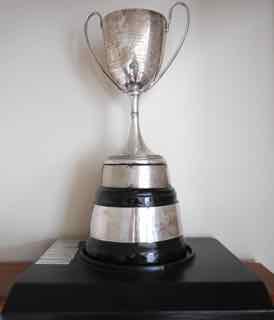 The Blackwood Cup is presented annually to a member of the Branch 50  (Wellington) NZART.

The Blackwood Cup was first presented in 1930 and is now perhaps the only physical link with the earliest days of our club. It has been awarded for technical excellence, operating brilliance and for all kinds of other reasons, during its long history.  The late Mr Blackwood donated and named the cup.  Mr Blackwood was a member of the Club in its early years, but he never gained an amateur licence.

In recent years the focus of the Blackwood Cup has returned to home brew construction. At the October meeting, members are invited to provide a brief presentation, of no more than 10 minutes duration, on a home brew project that they have worked on in the previous 12 months.  Typically around three to four entries are received.

The following table indicates the winners of the Blackwood Cup over the years: